Hi All....I will be exhibiting at the By Hand Fine Art and Craft Fair in November!!!!﻿ 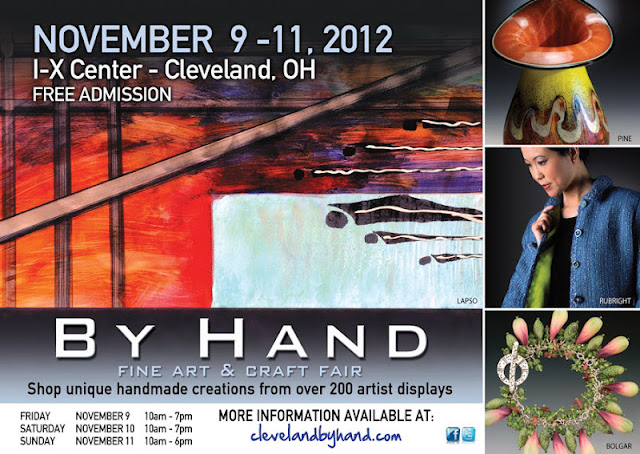 I have pieces in a show at the South Wing Gallery in Cleveland Heights.  The opening reception was on the 14th.  I took a couple pictures of the displays. The did a nice job of displaying all the artists work. 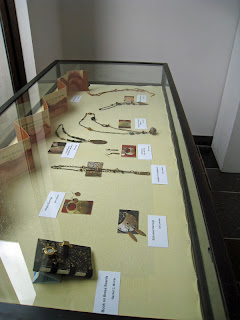 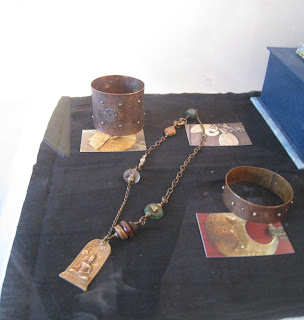 All the artists were introduced and we were asked to speak about their work.  I stumbled my way through a few minutes of how I make the pieces and what inspires me.  I gave the camera to Lou and asked him to take a few pictures while I was speaking....this is what I got.... 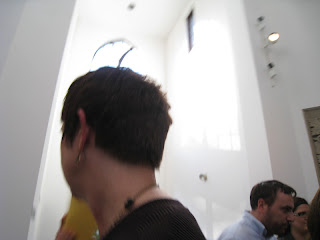 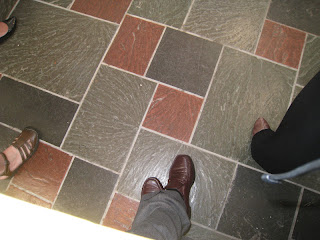 Anatomy of a Design

Years back I took a bead stringing class in Santa Fe from Marla Gassner.  I remember she described a design technique she used called "puddling".  In creating a new design she would put together puddles of beads so she could decide which combinations worked best.

When I create my jewelry, my bench usually ends up with multiple puddles on it.  When they all converge into one large puddle I know it's time to clean the bench.

Recently I put together a necklace around a large lentil for my gallery show.  Here are some pictures of the puddles I made. 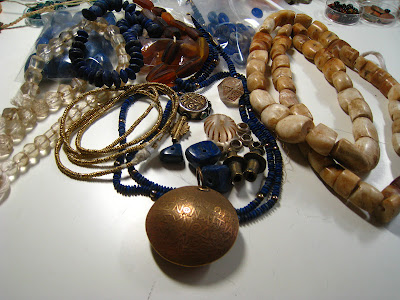 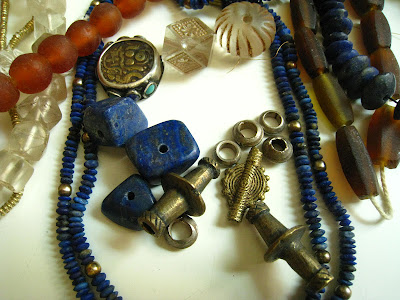 I put beads in and take them out until I have something I like.  Here is the finished necklace. 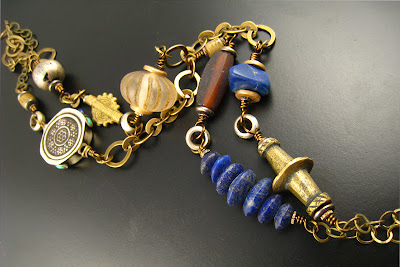 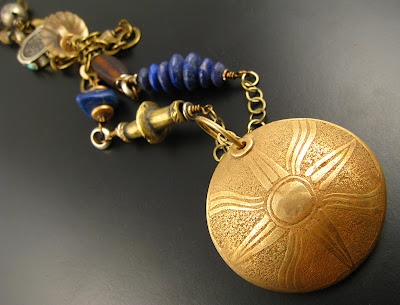 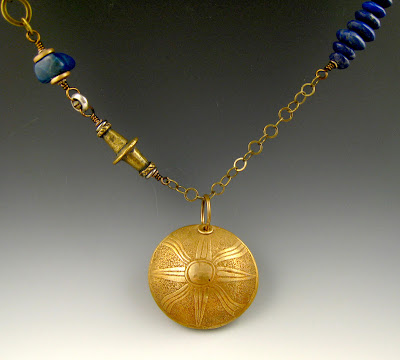 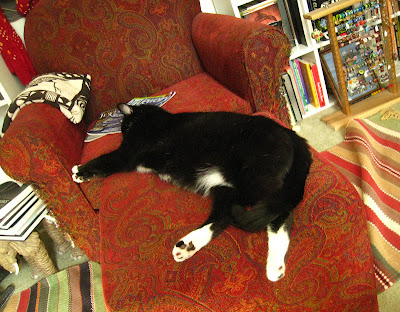 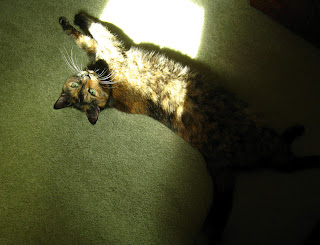 Most artists I know cringe when it comes to taking product shots of their work.  I'm one of them.  I've taken classes and tried a number of different set-ups including shooting outside.  Most of the time I shoot inside with a light tent.  I've tried using one light source, two light sources, three light sources....the variations have been endless.  So once again I'm trying something new.  I have been shooting against a black background.  It's actually a black shelf I bought at Target.  It's a bit reflective and it's flat.  When I take a long shot or a picture of something tall I end up getting the back of the light tent in the picture.  I have twisted and draped and arranged myself in a number of positions to avoid this.

So now I am trying another variation. I finally found some lights with small stands on them that I can position on the table.  Before these I had lights with clamps on them and I was clamping them to chairs and to the overhead chandelier....and hoped that I wouldn't bring it crashing down.  I also got a graduated back sweep which blocks out the back of the tent.

Tonight I took some pictures of a copper cuff....a big ass copper cuff that I am putting in the South Wing Gallery show. 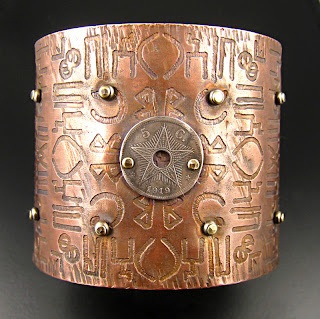 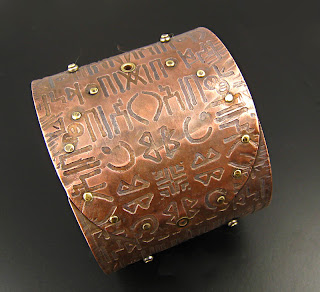 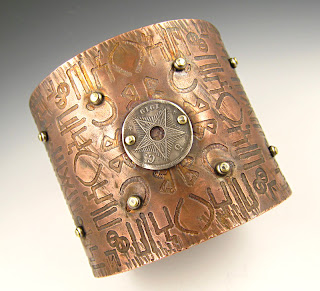 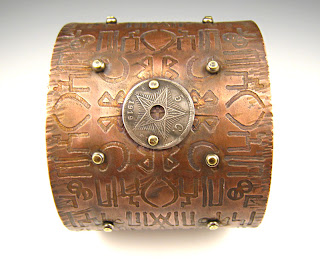 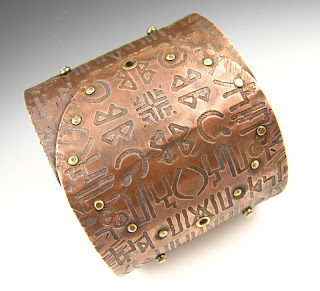 I still like a black background even though most magazine photographers tell you to use white or a graduated one.  I can see I still need to play with this a bit.  The pics taken on the white background look a little washed out to me.  They looked better in Photoshop.
Guess I will keep plugging away at it.  I wish photography was something that I had a handle on.  This continuous tweaking takes up way too much time.
Which photos do you like best???
.
﻿
.
Posted by Gail at 10:57 PM 9 comments:

Tuareg Jeweler of the Desert


Tuareg Jeweler of the Desert from Christian Peacock on Vimeo.
Posted by Gail at 6:34 PM 4 comments: 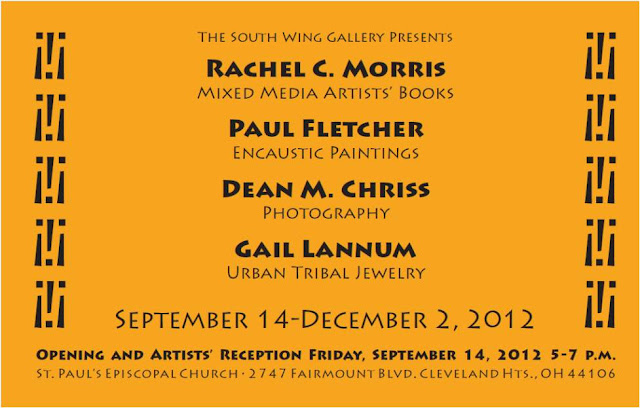 If you are in Cleveland please stop by the South Wing Gallery between September 14th and December 2nd to see the show.

And Lou wanted you all to know that he formatted the show invitiation as a jpg so I could put it on my blog.  He's such a child!!  And I have beat him appropriately.