I was so happy to leave work yesterday that I was dancing in the elevator...luckily I was the only one in it.  It's been brutal lately and it all came to a head these last few days.  We finalized a $12 million grant that was the most complicated thing I have done in 15 years.  It was a massive project and trying to manage all the doctors and scientists involved was like herding cats.

I decided that I need a break....so I'm not going back to work until January 3rd.  I have 11 straight days with no grants, budgets, or scientists.  As I walked out.....I had a smile from ear to ear....and that's when I started dancing.

Today I'm cleaning house, doing laundry and getting ready for Christmas.  My sister flys in tonight from Montana.  Presents aren't part of the picture for us anymore.  It's more importnat just to spend time together.  We talk, watch movies, and eat....family life revolves around food.  Meals are what bring us all together in the same place.

So I'm going to dance my way around the house, finish the laundry, and enjoy my time off.

I wish you all a very Merry Christmas, Happy Hanukkah, and Happy New Year. 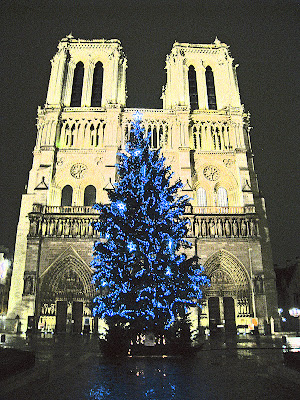 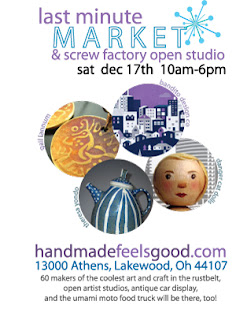 The Last Minute Market....my last show for the season..really just my second show for the season.  This one is a really cool show.  The Screw Factory is a factory turned into artists lofts and then an additional 65 artists come in for the day to sell all their cool stuff the Saturday before Christmas.

I sound like a broken record but the colors that come out of the kiln on the original bronze never ceases to amaze me.  It's the same carbon I have been using for 3+ years.  I let it sit out in the open and absorb everything in the laundry room.  My reward for this abuse is tons of color.

Of course a lot of it will disappear once I polish these.  But an underlayer of color will remain on the textured surfaces. 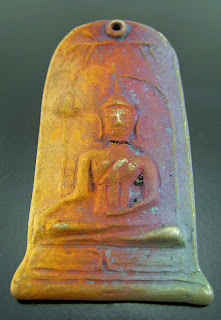 Buddah has a broken neck.  I saw the crack when I was sanding this piece so I added clay to the back and a small snake to the front.  It still cracked a little when I fired it but without the extra clay it may have cracked wide open. I tried breaking it.  It's strong...just a happy accident to make it look old. 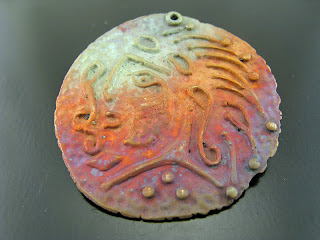 This is the Parisii coin that I have been working with for a couple of years.  I first made it with a polymer clay texture sheet.  Back in October, Holly Gage came to town to teach her repousse class.  I decided to work with the coin again.  I made it in silver in class and now in bronze.  The next thing I want to do in repousse is the stylized horse that was on the other side of this coin. 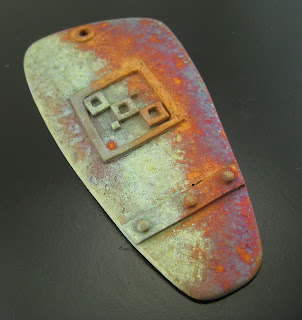 This was a piece I had sitting on the bench for a while.  It has an African pattern on it but you can't see it because of all the color on the piece.
.
Posted by Gail at 8:59 PM 2 comments:

Firing up the kiln...

I haven't been in the studio for about a month.  Work has been so insanely intense these last few weeks.  We are submitting a $12 million grant for cancer research.  I am totally wiped when I get home.  I can't wait until this thing gets submitted.

So I slept 12 hours Friday night and had lots of energy to work in the studio.  I meant to go in and clean it but instead I made new bronze pieces.  I put a few in the kiln tonight. 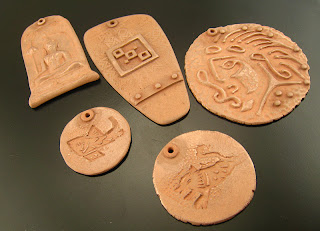 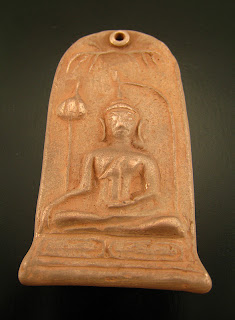 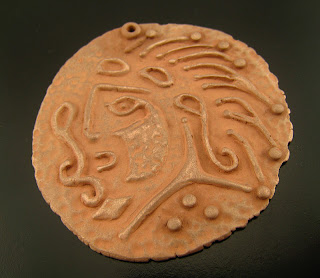 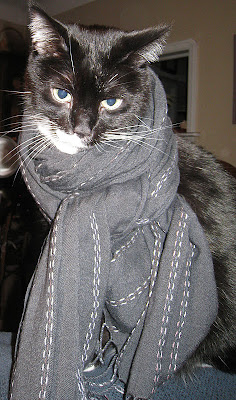 He wasn't getting it??  He's not stupid....he just refused to ask me.  He finally said...."Do you want to get married...is that what you want?"  And I said "Yes"...and a few other choice words for yanking my chain.

But we're like that...constantly teasing each other about something.  It's flirting.  We still flirt with each other after 24 years.

This was a second marriage for both of us so we eloped... and got married in a cave north of Santa Fe.  We hiked 2 miles out into the desert to a place called Windows in the Earth. 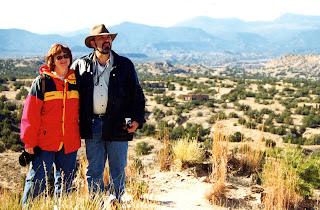 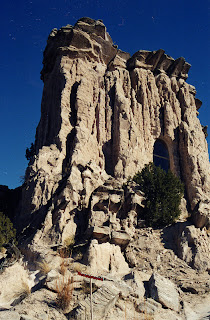 Inside this massive sandstone butte is a shrine.  It looks out over the Ojo Caliente River Valley and the Jemez Mountains. It's a beautiful place and it was a beautiful day.  The next day is snowed 2" so our timing was perfect. 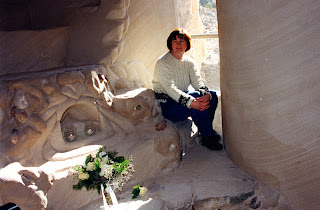 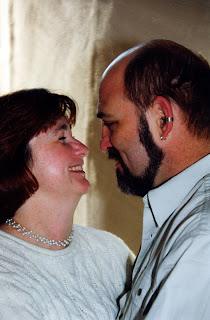 Our finery for the day amounted to blue jeans and hiking boots....just like I wanted it.  I did manage to wear a pearl necklace and Mary, my friend from work, gave me an old handkerchief with blue embroidery to carry. 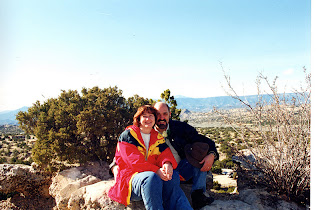 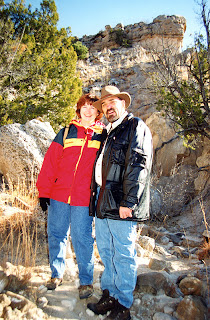 So last weekend we celebrated out time together, looked at the wedding pictures, and talked about everything we've done together...and what we want to do in the future.
.﻿
Posted by Gail at 10:52 PM 3 comments: