A Hurricane in Cleveland???

Normally when the east coast gets hit by a hurricane...we might get some rain and a little wind.  Well...Sandy was so large that it hit in Cleveland at the same time it hit the east coast.  And although we didn't have to live through a storm surge from the ocean...we did have 90 mile/hour sustained winds....all night.  Cleveland is called The Forest City...for a reason.  We have trees....everywhere.  Well...now we have a few less.  This is a common site all over the city and the suburbs. 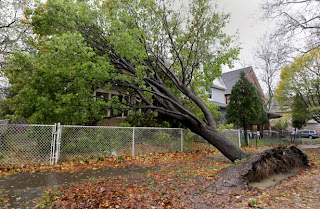 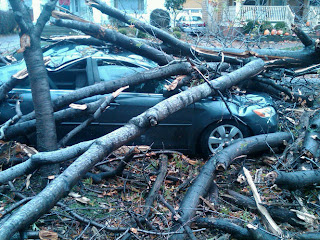 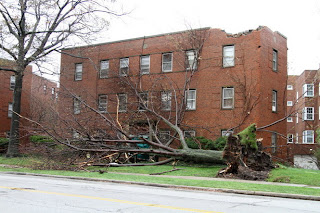 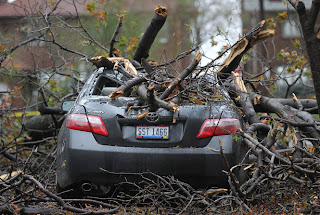 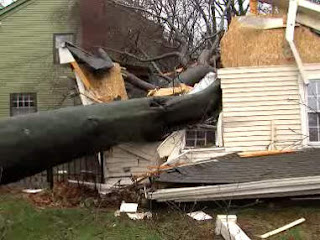 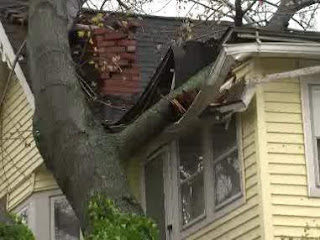 We were lucky in that we had some flooding in the garage...it's half underground...and a small leak in the roof.  The biggest thing that we have to endure is no power.  It went out about 8pm Monday night and the estimate is that we won't have it back until Monday night.  We aren't on an important grid.  If you are on a grid with a hospital, police, or fire you pretty much got power back right away.  Next in line are grids that have government buildings.  We are just on a grid with houses...so we have a low priority.  We do have hot water so we can shower.  We also have a gas stove so I can cook.....hahaha....yeah right.  What I have mostly been doing is boiling water on the stove top to add heat to the house.  When I left this morning it was 50 degrees.  It suppose to be sunny over the weekend so I hope that helps heat the house up a bit.

What has been hard to do is live in the dark.  I don't know what is going on in the world which... on the upside I don't have to listen to political ads or phone calls.  But sitting in the dark is making me nuts.  As you can imagine...all the lanterns, generators, kerosene heaters that can be had....are all sold out.  We did manage to snag a couple small Riyobi lanterns last night at a Home Depot about 30 miles west of us.  So at least we have a small amount of light.  And last night we watched TV on my iPad.  We were watching Revolution.  The show starts with..."We lived in an electric world.  We relied on it for everything...and then the power went out.  We weren't prepared".  We both started cracking up.  But we bundled up under blankets and our 2 cats and watched TV.

I have a show next weekend and this week is usually late nights as I make my final pieces....well...I'm just going to have to live with what I have for the show.  I will get some work in over the weekend since I will be home in the day light.

One last pictures...Lake Erie waves crashing up over the shoreway. 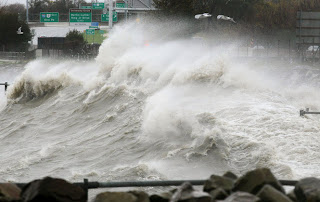